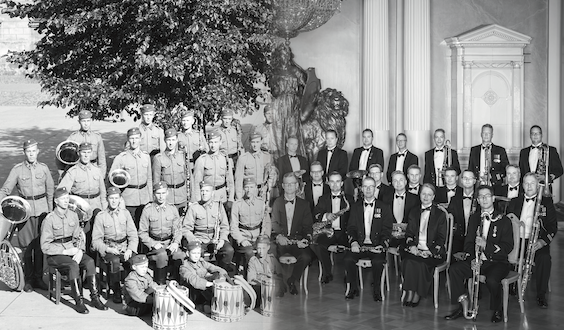 The Representative Orchestra of the President of the Republic, the Guards Band is the oldest continuously operating professional orchestra in Finland.

The band was established in 1819. Nowadays the official representative band of the Finnish Defence Forces consists of 42 full-time musicians and performs at military events and state events, such as state visits and The Independence Day’s reception at the Presidential Palace. See all the events in our concert calendar.

The Guards Band’s efforts in the Finnish music scene can be seen far and wide. The orchestra’s diverse expertise in a variety of musical styles has broadened the audience in many ways, and the notable artistic achievements have brought the band to the culture pages of the main national newspapers.

We welcome you to experience our concerts – music just for you! The springtime popular music concerts feature a range of top singers of Finnish schlager music. In the summer, the park concerts provide the opportunity to take a rest from your day-to-day schedule and enjoy music with your friends.

The Töölö concerts held at the Temppeliaukio Church highlight current musicians and composers by featuring premiere performances and future classics. The autumn culminates with the military music tradition day concert at the Helsinki Music Centre, which includes the most wondrous classical pieces in music history, and the atmospheric Christmas concert held at St. John’s Church in Helsinki. In addition to Helsinki, the Guards Band performs in other cities in Southern Finland such as Lahti, Hämeenlinna and Tampere!